According to the National Institute on Drug Abuse (NIDA), 7.7 million adults have co-occurring disorders.1 In this sense, the term “co-occurring” refers to the simultaneous presence of a substance use disorder (SUD) and a mental health condition.2

The presence of both PTSD and a substance use disorder is one of the most common co-occurring disorders. This article will discuss how and why PTSD often co-occurs alongside drug or alcohol addiction.

What Is Post-Traumatic Stress Disorder? 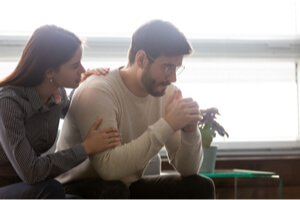 PTSD is a condition that develops as a response to experiencing one or more highly traumatic, life-threatening events, such as terrorism, combat exposure, gun violence, rape or sexual assault, or any other circumstances where a person is threatened with serious injury or death.3 Exposure to such trauma can result in intense emotional and physical responses even long after the event has occurred, and can include flashbacks, nightmares, and/or panic attacks.3

People with PTSD may experience emotional distress in the form of sadness, fear, anxiety, and anger.3 They may have a tendency to isolate themselves to avoid potentially triggering events.3  Situations that would otherwise be considered ordinary, such as an accidental touch or loud noise, can evoke strong negative emotional and physiological responses in those who have PTSD.3

Individuals with PTSD can experience a number of effects. Individuals with this condition might present with just a few (or several) of the following signs and symptoms:4 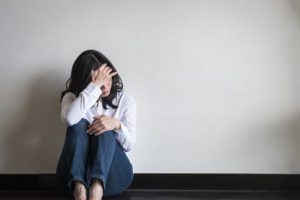 A substance use disorder that occurs alongside PTSD is an example of a common co-occurring disorder. Research has shown that 46.4% of people who have PTSD also meet the criteria for having a substance use disorder.5 In fact, compared to women without PTSD, one study showed that women with PTSD were 2.48 times more likely to struggle with alcohol misuse or dependence and 4.46 times more likely to struggle with drug misuse or dependence.5

Similarly, that same study reported that compared to men without PTSD, men with PTSD were 2.06 times more likely to experience alcohol misuse or dependence and 2.97 times more likely to experience drug misuse or dependence.5 It is important to note, however, that a diagnosis of PTSD does not mean that the individual will in fact develop a substance use disorder, however PTSD can be a trigger to misuse substances. Individuals with PTSD may misuse substances in order to numb or cope with their signs and symptoms, putting them at risk of developing a substance use disorder.

Symptoms of Co-Occurring PTSD and Addiction

PTSD and addiction are diagnosed as co-occurring when a person meets the criteria for each of these disorders in addition to having them simultaneously. The diagnosis of a substance use disorder is based on a pathological pattern of behaviors related to the misuse of a substance, including impaired control, social impairment, risky use, and pharmacological criteria.4

These behaviors will vary depending upon the type of substance being used, as well as other factors related to the addiction. Symptoms of addiction include, but are not limited to, the following:4

Together, the symptoms of both PTSD and addiction can worsen when both conditions are co-occurring.7 The symptoms associated with this condition can include:7

Veterans With PTSD and Substance Use Disorder

Research has shown that compared to the general population, veterans are more likely to develop comorbid PTSD and a substance use disorder.7 Research suggests that the severity of combat exposure is proportionately correlated to the development of substance use disorders. The greater the severity of exposure, the higher the odds of misuse and the potential for developing addiction.7 For example, the prevalence rate for the development of alcohol use disorder in veterans of Operation Iraqi Freedom is estimated to be approximately 21%, while 41.4% of veterans who served in the Vietnam era or later received a dual diagnosis of PTSD and SUD.7

AdCare Treatment Centers is proud to offer our Salute to Recovery program, which provides quality co-occurring disorder treatment for veterans. We are in the VA’s network of community care providers, so our facilities are covered under VA healthcare for at least a portion of your treatment.

AdCare’s mission is to improve the lives of our patients and their families by providing safe, effective, recovery-based alcohol and drug treatment. Treatment is the recommended course of action for families working through PTSD and SUDs, and treating them together has a bigger impact than treating them individually.2

AdCare Treatment Centers offer different levels of addiction treatment for co-occurring disorders with specialized programming options for veterans. If you or someone you love is struggling with PTSD and a substance use disorder, contact us right now at . We can connect you with one of our compassionate and experienced rehab admissions navigators who can provide you with more information about several things, including payment options and potential insurance coverage for rehab.

Get the process of your recovery started right now by filling out our safe online . Do not wait. Reach out for the help that you or your loved one deserves.

Jomana Papillo is currently a Ph.D. candidate in Business Psychology, with a concentration in Behavioral Economics. She received her undergraduate degree in Environmental Studies/Biology and went on to pursue her Master’s degree in Business...Read More

Prefer getting help via text?
We're available 24/7 via text message. Signup below for access to our team when its convenient for you!
and many more...
✕
Instantly Check Your Insurance Coverage
Your information is safe & secure
At AdCare, we accept most types of private health insurance, government-issued insurance, and offer a variety of payment options. In Massachusetts, we also accept Medicare, Medicaid and Massachusetts state health care.
You can quickly and privately check your insurance benefits to see if you're covered for addiction treatment services. We’ll be able to tell you if your provider is in network with AdCare Treatment Center and all American Addiction Centers locations.
This means your treatment may be FREE1 depending on your policy, copay, and deductible.
Get the Info & Help You NeedWe have 9 locations across RI & MA. Learn about your options.