Our guide will help you understand what bipolar disorder is, its association with addiction, risk factors for co-occurring disorders, and effective treatment options for individuals struggling with a dual diagnosis, such as co-occurring bipolar and substance use disorder.

What is Bipolar Disorder?

Bipolar disorder is a mood disorder that is characterized by unusual changes in mood, thought patterns and energy with symptoms of both depression and mania. 3 While most people experience highs and lows in mood and energy levels, bipolar disorder “swings” can be extreme and change rapidly or very slowly over time and are markedly different than “normal” changes in mood or behavior as these changes drastically affect an individual’s daily living.3

Bipolar disorder is marked by periods of depression and mania or hypomania. Symptoms of bipolar disorder can vary in severity, occurrence, and frequency.6,7 Generally speaking, symptoms are divided into three categories,6,7

Episodes of Mania. These episodes are typically the “highs” of bipolar disorder and can include:

Episodes of Hypomania. These episodes are similar to episodes of mania but less intense. It may not be evident to those with bipolar disorder that they are experiencing an episode of hypomania, but others around them may recognize an unusual pattern of behaviors.

Episodes of Depression. These episodes are typically the “lows” of bipolar disorder and can resemble “traditional” depression symptoms, including:

Bipolar disorder is broken down into subtypes depending on the frequency and presentation of symptoms.6,7 A qualified healthcare professional can provide a diagnosis of bipolar disorder after taking a detailed physical and mental health history.7 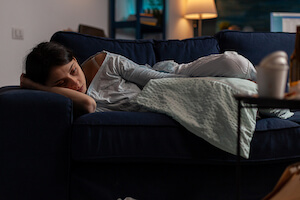 Someone with bipolar disorder is more likely to also struggle with addiction to drugs or alcohol.8 Evidence suggests that between 30%–50% of people with a bipolar disorder diagnosis will develop a substance use disorder in their lifetime.3

The impact of substance misuse on mental illness, and vice versa, are often intertwined, making it challenging to know which came first.9

How to Treat Co-occurring Bipolar Disorder and Addiction

AdCare offers an integrated treatment program that addresses both bipolar disorder and substance use disorder at the same time. Our inpatient and outpatient programs focus on whole-person care, using evidence-based therapies to effectively treat and manage co-occurring disorders.

If you are struggling with co-occurring bipolar and substance use disorders, or wondering how to help a loved one with addiction, we can support you on the journey. Call our admissions navigators at to learn more about our inpatient addiction treatment centers in Massachusetts and Rhode Island. They will be happy to answer your questions about the treatment admissions process, using health insurance to pay for treatment, and other ways to pay for treatment.

When you’re ready, we’re here to help. Reach out to us today to get on the road to recovery.

Leah Walker is a licensed marriage and family therapist with a PhD in Family Relations. Walker has over 20 years of clinical experience working with children, adolescents, and adults, focusing on family relations, substance abuse, and trauma. LeahRead More

Prefer getting help via text?
We're available 24/7 via text message. Signup below for access to our team when its convenient for you!
and many more...
✕
Instantly Check Your Insurance Coverage
Your information is safe & secure
At AdCare, we accept most types of private health insurance, government-issued insurance, and offer a variety of payment options. In Massachusetts, we also accept Medicare, Medicaid and Massachusetts state health care.
You can quickly and privately check your insurance benefits to see if you're covered for addiction treatment services. We’ll be able to tell you if your provider is in network with AdCare Treatment Center and all American Addiction Centers locations.
This means your treatment may be FREE1 depending on your policy, copay, and deductible.