The Surge of Methamphetamine: Understanding the Effects of Use and Treatment Options

As the use of methamphetamine increases, understanding the serious and often life-threatening effects of this man-made drug and effective treatment approaches is essential. 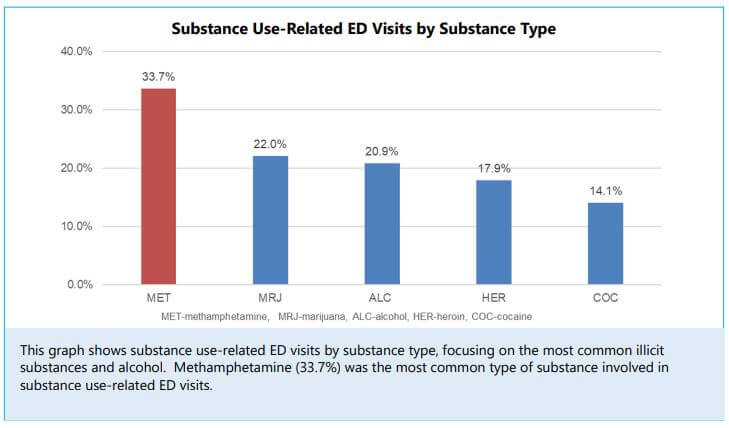 Twin Epidemics: Rising Rates of Methamphetamine Use among Opioid Users

Methamphetamine, benzos, and cocaine were present in 63% of opioid deaths from July 2017-June 2018. Half of those cases also involved fentanyl. As with opioids such as heroin and other illicit drugs, methamphetamine is also sometimes laced with fentanyl.  Cheap synthetic opioids are sometimes being added to street methamphetamine. These disturbing trends suggest that the serious and potentially lethal effects of opioid use may soon be compounded by the surge in methamphetamine use.2

Approximately 1.6 million people (0.6 percent of the population) reported using methamphetamine annually, and 774,000 (0.3 percent) reported using methamphetamine in the past month. Twenty-three (23.3) was the average age of new users in 2016. Statistics also show a high correlation of use in the gay and LBG communities with 11.51 % of use attributed to the gay/lesbian population, 12.1% to bisexuals, and 5.72% to heterosexuals.3

What are the characteristics of Meth?

Shift in Production and Distribution

In recent years, the production and distribution of this man-made drug has shifted dramatically. The sharp drop (80%) in domestic laboratory incidents from 15,256 in 2010 to 3,036 in 2017 reflects this metamorphosis4 and is due largely to the Combat Methamphetamine Epidemic Act of 2005 – an act requiring pharmacies and other retail stores to log the purchase of products containing pseudoephedrine and limit the number of products that an individual can purchase per day.5

Methamphetamine is often smuggled into the United States in powder or liquid form and then transformed into crystal meth by super conversion laboratories.[8]  Meth is also being pressed into a pill form intended to resemble ecstasy and enhance the drug’s appeal to new users.[9]

Meth is harmful to the Brain and Central Nervous System

Methamphetamine directly assaults the brain and central nervous system, producing serious and potentially life-threatening psychological and physical health effects in both the short and long term.

Psychosis, aggressive or violent behavior, severe dental problems, and weight loss are some of the effects of long-term use.  Between 15 and 28% of patients admitted to a hospital for meth psychosis need hospitalization for more than two-to-three months following admission. Tragically, psychosis symptoms can last anywhere from six months to 12 years following abstinence.  Chronic psychosis can occur in users with no premorbid psychiatric risk factors.  Additional long-term effects include cardiovascular complications and dysfunction, changes in brain structure and function, deficits in thinking and motor skills, increased distractibility, memory loss, and mood disturbances.[10]

Determining whether a patient needs inpatient psychiatric and/or medical care may be a necessary first step toward treatment. It’s important to learn whether the patient’s mental health is seriously comprised.  For example, is the patient suicidal, experiencing hallucinations, paranoia, or severe depression and in need of immediate psychiatric care?  Does he/she require medical care for conditions such as cardio complications, renal issues or failure, sleep deprivation, malnutrition, and deficiencies?

There are no approved pharmacotherapies for treating psychostimulants such as methamphetamine.  However, a clinical study conducted in Iran shows bupropion and buprenorphine (Suboxone) used for opiate withdrawal and bupropion (Wellbutrin) used for nicotine cessation and depression to be effective in treating methamphetamine cravings. Mirtazapine and Naltrexone also demonstrate efficacy in treating psychostimulants. [11]

Behavioral and cognitive therapies such as the Matrix Model, Contingency Management, and the Community Reinforcement Approach (CRA), as well as Exercise, Trauma-Informed Care, and Harm Reduction all show efficacy in treating methamphetamine and/or other stimulant use.

The Matrix Model provides a framework for a structured, intensive 16-week treatment program designed to help stimulant users achieve abstinence.  Often offered in a residential setting, treatment is provided by a therapist(s) functioning as a coach and teacher, encouraging and reinforcing positive behavior change.  Patients learn about addiction and relapse and receive individual and group therapy. They are also introduced to self-help programs and monitored for drug use through urine testing. [12]

Contingency Management therapy reinforces or rewards patients for evidence of positive behavioral change. This approach is based on the tenet that a behavior will increase in frequency when it is reinforced in close temporal proximity to its occurrence.

In a U.S. study, over 800 individuals with stimulant use disorder from 14 clinics were randomly assigned to standard care or standard care plus contingency management therapy for 12 weeks. For each stimulant-negative urine sample submitted, the number of draws earned increased with weeks of consecutive abstinence. Participants earned at least one draw with a chance of winning a prize ranging from $1 to $100 in value.

An intensive 24-week outpatient therapy program for treating individuals addicted to cocaine and alcohol, the Community Reinforcement Approach (CRA) Plus Vouchers employs a range of recreational, familial, social, and vocational reinforcers, along with material incentives  to make a non-drug-using lifestyle more rewarding than substance use.[14]

Patients participate in weekly individual counseling sessions focused on improving family relations.  They learn a variety of skills to minimize drug use and receive vocational counseling.  They are also encouraged to develop new recreational activities and social networks. With consecutive clean urine samples, the value of the vouchers they earn increases and vouchers may be exchanged for retail goods that are consistent with a drug-free lifestyle.

The goal of treatment is for patients to maintain abstinence long enough to learn new life skills needed to help sustain a drug-free life. Maintaining abstinence for an extended period of time is an achievement. It’s important, however, for patients to be aware that continuing in some form of treatment over the course of their lifetime is beneficial and often necessary for sustaining long-term recovery.

Exercise has tremendous health benefits and positively affects many aspects of health impacted by stimulant use, such as sleep, cognitive function, mood, weight, quality of life, and the ability to feel pleasure.[15]

Adopting a trauma-informed approach that includes practicing de-escalation techniques is essential for professionals who interact with mentally and emotionally compromised
individuals. [16]  It can also help to remember that what happened (the traumatic incident) is not nearly as important as how the trauma is affecting the individual.

Employing harm reduction strategies by educating patients about “safe” drug use and encouraging healthy selfcare such as good hygiene, proper nutrition, water consumption, and adequate sleep can help extend a patient’s life and open the door to treatment and recovery down the road.

Treating Patients with Methamphetamine Use Disorder

The stabilization of acute medical and psychiatric related to the use of methamphetamine or other stimulants is often necessary before a patient can start treatment. Behavioral and cognitive treatment approaches that reinforce abstinence and other healthy behaviors with tangible and intangible rewards have improved patient retention in treatment and extended abstinence significantly.  The way we treat methamphetamine and stimulant use is different than the way we treat other kinds of substance use. The treatment goal, however, is the same: to help patients maintain abstinence long enough to build the life skills they need to sustain recovery.

Traveling for healthcare & essential services is permitted across the US. Addiction treatment is essential, and we are here for our patients in this difficult time. AdCare is taking every precaution to ensure patient and staff safety. We are able to test incoming patients and anyone feeling unwell to ensure peace of mind and focus on addiction treatment.
About The Contributor

Reach out to us any time, day or night
One size treatment doesn't fit all. We will tailor treatment to your needs.
Are you covered for addiction treatment? Find your insurance.
and many more...
✕
Instantly Check Your Insurance Coverage
Your information is safe & secure
At AdCare, we accept most types of private health insurance, government-issued insurance, and offer a variety of payment options. In Massachusetts, we also accept Medicare, Medicaid and Massachusetts state health care.
You can quickly and privately check your insurance benefits to see if you're covered for addiction treatment services. We’ll be able to tell you if your provider is in network with AdCare Treatment Center and all American Addiction Centers locations.
This means your treatment may be FREE1 depending on your policy, copay, and deductible.
Your Next StepsRecovery is possible. We're here to help with you addiction.